Best and worst energy firms: where does your supplier rank?

0
Written by: Joanna Faith
Octopus Energy has come out on top in Which?’s customer satisfaction survey for the second year in a row. The firm, which supplies more than a million homes, received an 83% customer score and five-star ratings for billing accuracy, customer service and complaints handling.

Small and medium-sized suppliers dominated the top of the rankings this year, while the big six providers – British Gas, Eon, EDF, Npower, Scottish Power and SSE – all languished in the lower third of the table.

Out of the biggest energy firms, SSE and Eon were the highest-scoring coming in joint 24th with smaller firm E.

Which? noted that SSE’s household energy business was recently purchased by Ovo so customers could see changes in their service in the future.

Scottish Power landed in the bottom three after receiving the most disappointing score of all the large providers – 51%.

Which? surveyed 8,385 UK adults between 2 and 30 October 2019 about their energy supplier and asked them to rate companies on a number of criteria including value for money, customer service, bill accuracy and digital tools.

Robin Hood Energy suffered the biggest fall in the rankings after it plummeted from second place last year to a mid-table ranking, tied with Boost Energy and Utilita.

While Robin Hood customers were generally positive about value for money and billing, a smaller proportion of people said they would recommend the firm compared to last year.

Although a number of small companies dominated the top of the rankings, not all of the small and medium-sized firms performed well. Newcomer to the survey Ampower performed badly with a disappointing customer score of 53%. Customers rated its billing, customer service and digital tools as poor.

Together Energy finished bottom of the table, despite having secured a mid-table position last year. It scored poor two-star ratings from customers for billing accuracy, clarity, customer service and value for money.

Natalie Hitchins, head of home products and services at Which?, said: “Consumers have dozens of energy suppliers to choose from – and it is clear that some newer challenger providers are better than their larger counterparts at keeping customers happy and delivering a better service.

“Customers shell out hundreds, sometimes thousands, of pounds a year on their gas and electricity bills so it is right that they expect good service from their energy supplier.

“If you are one of the many customers out there who feels their supplier is falling short, consider moving to one that can offer a better service as well as cheaper prices – you could save hundreds of pounds a year.” 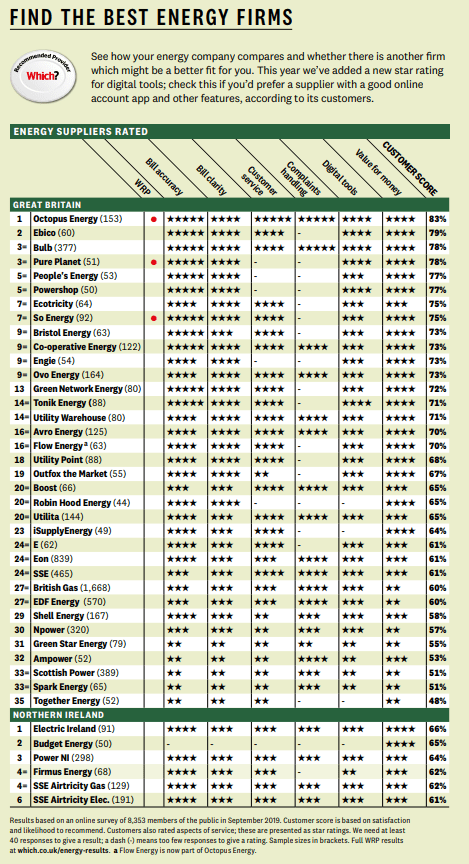