0
Written by: Lana Clements
Homeowners in wealthy areas of London are opting to sell rather than let out properties, following buy-to-let tax and stamp duty changes in a trend that could spread to the wider market.

The number of properties listed for sale in so-called prime central London (areas such as Chelsea, Belgravia, Marylebone and Knightsbridge) jumped by 5.4% in the year to February, while in the lettings market this was down 21.2%, according to analysis by estate agent Knight Frank. (See graph below.)

The change in part reflected additional tax burdens for landlords, the agency said.

Wider house price indices have shown London to be the worst performer in recent months. 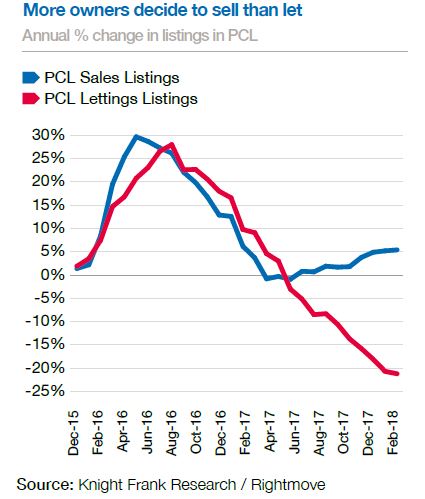 Andrew Montlake, director at London-based broker Coreco, said the firm had seen a drop in let-to-buy across the market– where people hold on to their homes when moving in with a new partner.

The additional stamp duty surcharge for buying a second home and removal of buy-to-let mortgage interest tax relief are the main reasons for this change, according to Montlake. He said: “Now there is an extra cost of let-to-buy, so people are putting properties on the market rather than keeping.”

However, this trend is not as evident among wealthier clients, who are prepared to hold on to properties for 15-20 years in order to benefit from capital appreciation, Montlake added. Political uncertainty and the threat of rising interest rates do not appear to be driving behaviour as much. He said: “Brexit has no effect whatsoever – we haven’t noticed a change where Brexit is concerned.”

Knight Frank’s data showed trading volumes have picked up by around 2% over the past year, which is a trend that Montlake has also witnessed. Mark Harris, chief executive of mortgage broker SPF Private Clients agreed that there has been a pick-up in activity.

He said: “More people are selling rather than letting, which is certainly something we are seeing. This year has seen an increase in the number of sales as the market has settled down, transactions are picking up and people have come to terms with higher stamp duty being here to stay and Brexit negotiations are progressing well. Life has to carry on and is doing so.

“SPF Private Clients has seen a 45% increase in £1m-plus mortgage enquiries in the first quarter of this year compared with the same quarter last year, which backs up this data.”

Ten million Brits to ‘work until they drop’

More than three million people expect to work until they die, with another 10 million saying they will work until...